A 19th-Century London Townhouse Gets an Avant-Garde New Look

A late-Georgian stucco mansion is not an obvious home for a collection of cutting-edge art and design—but this London residence comes with a historic connection to the avant-garde. In 1913, at the same address, leading society hostess Lady Hamilton created a showcase for the Bloomsbury Group’s newly established design collective, the Omega Workshops (the critic Roger Fry advised her on the decor, and Virginia Woolf’s sister Vanessa Bell was among the contributing artists). So it is entirely appropriate that, a century later, the property’s present owner—a Hong Kong–based art collector with strong ties to several European museums and galleries—has reintroduced a forward-thinking aesthetic to the place, this time with a wide-ranging international selection of pieces by designers like Mattia Bonetti and Martin Szekely and such artists as Adam Fuss, Gabriel Kuri, Fiona Rae, Anselm Reyle, and Keith Tyson.

What principally attracted the collector to the building was, she recalls, “the rarity of the dimensions, and the unexpectedness.” A peculiarity of the five-story mansion and its neighbors along the block, all built in the 1830s, is that their grander sides face the garden, rather than the street. “It’s very historic and unique,” she says.

The sizable apartment she occupies with her husband and two small children takes up the house’s three lowest levels. The first and second floors are grand in scale, their elaborately corniced ceilings rising to heights of 13 feet or more, while the garden level’s ceilings extend to 12 feet. This presented designer Francis Sultana and architect Thomas Croft, both based in London, with a problem and an opportunity. Though ideal for entertaining and displaying works of art, the vast rooms weren’t obviously suited to a young family, and historic-preservation regulations stipulated that the spaces couldn’t be fully partitioned to give them more intimate proportions. The challenge, the owner says, was “to create a home, not a museum.”

Sultana and Croft (who has worked for minimalist architect John Pawson) have collaborated on several projects, despite possessing rather divergent sensibilities. “Whatever I choose in terms of furniture and decoration is quite strong,” explains Sultana, “whereas Tom is the total opposite.” The owner also took an active role, and in the end a harmonious triumvirate was established. “Francis was quite maximal, Thomas was very minimal, and I was in the middle,” says the owner. “But they were both very thoughtful about not imposing their visions.” (Lighting designer Sally Storey of John Cullen Lighting also helped humanize the building’s scale.)

The entrance opens onto the apartment’s most impressive space: a cavernous, irregularly shaped drawing room with a grand stairway rising to the second floor. Large enough to hold 200 people, this area was used by the former occupants to host lectures and discussions—a tradition the new owner has continued. But now, thanks to the careful deployment of striking artworks and opulent furnishings, it also serves as a sort of gallery—George Condo, Keith Coventry, Thomas Houseago, Nate Lowman, Marlo Pascual, and Eva Rothschild are just some of the artists represented—and, on quiet nights, a comfortable place to curl up with a book. Long twin sofas, separated by a mirrored curvilinear table by Ron Arad, face each other across a gray silk carpet by Fort Street Studio, while a plump purple sofa by Jean Royère resides in front of an expansive window. At the base of the stairway, next to the Steinway piano, is a somewhat surreal eggplant-esque light sculpture by Elizabeth Garouste and Bonetti.

A broad doorway leads to the dining room. The designers brightened this once-gloomy space by ripping out dark paneling, painting the walls white, and installing a splendid light fixture that runs the length of the room. Nickel plated, gleaming with crystal, and resembling a giant but delicately woven basket, the piece was created by the design duo Patrik Fredrikson and Ian Stallard. “I’d seen a project they’d done with Swarovski years back,” explains the owner, “and because the ceiling needed something quite grand, we came up with this.” The fixture’s intricacy contrasts with the simplicity of the glossy black carbon-fiber dining table below it, a collaboration between industrial designer Terence Woodgate and a race-car engineer. The table is matched with black enameled-aluminum dining chairs by Bonetti and offset by a pair of white Vladimir Kagan sofas. Painted vases by Ai Weiwei provide splashes of color—as do the two abstract artworks on the walls, a Wolfgang Tillmans photograph and a Mark Bradford painting. 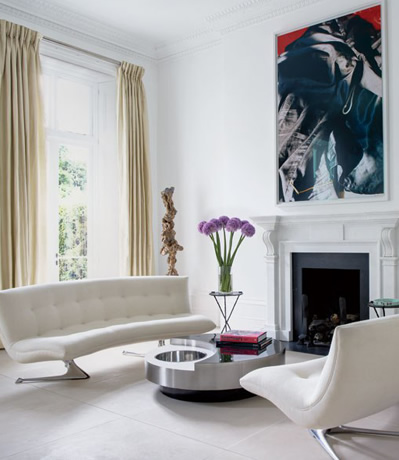 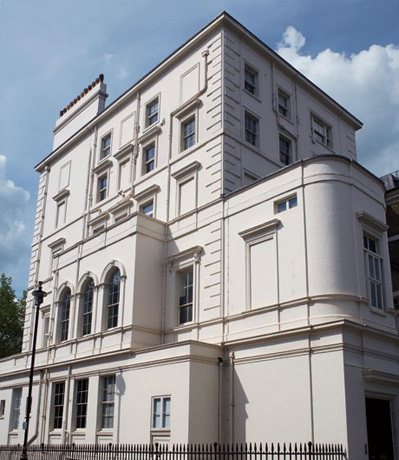