A Greenwich Village Townhouse Gets a Warm and Modern New Look

Modern-minded homeowners have been plagued by a design problem for decades: How does one spruce up an old house for contemporary living without losing sight of its history or compromising its character? The best answer is often the simplest—strip it down, update the essentials, and invest in handsome furniture and spirited art.

That was the approach taken by Manhattan architecture firm Leroy Street Studio and Los Angeles interior designer Christine Markatos Lowe when they were selected to bring a Greenwich Village townhouse up to date. The Greek Revival structure is a gem, erected in 1842 by noted builder Andrew Lockwood. Its lot is generous, several feet wider than the neighborhood norm, allowing for a four-story house whose especially pleasing proportions afford a rare sense of horizontality in a vertical city.

But few of the dwelling’s gracious qualities were evident when the new owners, a couple with four young boys (and three dogs), purchased the place. A single man had lived there for decades, seemingly decorating it more by default than intention. The moldings were buried under maroon and mustard paints, the kitchen was tiny, and the skylit attic studio was a sad repository for 1970s-era exercise equipment. “Frankly it was hard to see the potential,” the husband says. “It was a bachelor pad.”

Coming from a sunny loft in SoHo, and a bit apprehensive about relocating to more formal surroundings, the couple wanted to retain something of their downtown lifestyle. Markatos Lowe helped to ease that transition by “keeping some furnishings from their old apartment and mixing them into the new setting,” she says. For starters she arranged the parlor-floor living room around one of the clients’ favorite items, an enormous square ottoman by London decorator Veere Grenney. It had been a centerpiece in their former home, where the children found that it made an excellent trampoline. Here, its worn goatskin upholstery instantly takes the grand space down a comforting notch. Geometric screen prints by David Roth deformalize the atmosphere further, while also acting as a bridge between sinewy 20th-century furnishings (an Egg chair by Arne Jacobsen, armchairs by Paul McCobb) and elaborate architectural details (notably an Adam-style mantel frosted with bows and foliate swags).

Especially loftlike is the smartly renovated English basement, once a warren of rooms rented out as a separate apartment. After Leroy Street Studio tucked some supporting steel beams into the ceiling, the level was gutted. Today it is a floor-through family enclave that accesses a verdant garden. Just inside the garden entrance of the unobstructed space is a sitting area with a reading nook, formerly a fireplace, while the street-facing side features a casual dining area with a teak table flanked by a leather-padded bench and a striped sofa. In between the two sections is an open kitchen, centered on an 18-foot-long concrete island (the old kitchenette, adjacent to the dining room on the parlor floor, was renovated and retained for entertaining). From the island, the parents can oversee the children while preparing dinner. “Accommodating a family of six dictated a lot of the design,” says Marc Turkel, a partner at Leroy Street Studio. “They’re determined to have fun.”

For the boys, much of that fun is had in their bunk room, a 21-by-24-foot bedchamber that occupies most of the attic level. The architects closed up the room’s three long skylights, relying on five deep windows to supply light during the day. Shiplike coziness is the result, though few oceangoing vessels ever possessed a sprawling Calder-esque chandelier or elegant catalpa-wood bunk beds equipped with capacious shelving units. In the middle of the room, a custom-made Vladimir Kagan sectional sofa—its low, blocky Ultrasuede-clad form incorporating integral chairs and masses of storage—creates a landscape for playing, reading, or just hanging out. Opposite it, four spare desks are optimistically lined up beneath the windows; in reality, the parents usually have to station the rambunctious boys far apart, on various floors, for any schoolwork to be done. 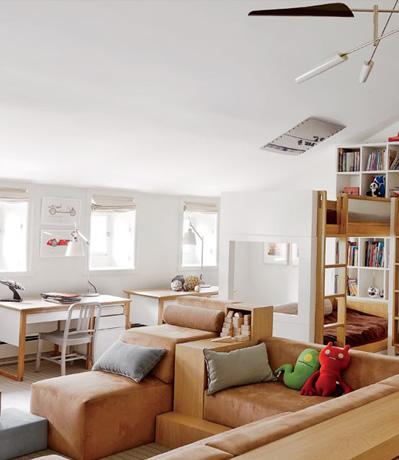