Given musician Sir Elton John and film producer David Furnish’s reputation as savvy collectors of contemporary art, one could be forgiven for assuming that the swing set on the front lawn of their new Los Angeles house is actually some installation by an up-and-coming artist—perhaps a discovery made during John’s recent concert tour. But it’s a mistake to assume anything about this pair. While the home may present certain earmarks of rock-icon fabulousness (a swank Beverly Hills address, breathtaking hilltop views), in both scale and design this modernist dwelling was chosen with one overriding goal in mind: to create a comfortable West Coast base for the couple and their expanding family, which includes a two-year-old son, Zachary, and a newborn son, Elijah, who arrived just as this issue went to press.

What the two men envisioned when they began looking for a new home was a manageably sized residence from the 1960s, a period that epitomizes their shared ideal of California indoor-outdoor living. They wanted a place where their children could move around freely and have access to “a front and back garden and some fresh air,” John says. Those were qualities their previous L.A. abode—a sleek jewel box perched on the 20th floor of a residential tower (Architectural Digest, December 2009)—simply did not offer. The search didn’t take long. On the first day of hunting, Furnish found the nearly 5,000-square-foot, single-story structure, built in 1966 in Trousdale Estates, a neighborhood famous for its midcentury architecture. “It’s quintessential L.A.,” Furnish says. “I remember walking to the front door and saying, ‘It’s perfect.’”

“And the one-story thing is so great for Zachary,” John adds. “He just charges through the house like a little firecracker!”

Still, fashioning a child-friendly environment with the visual pizzazz of their former home would require some fancy footwork, and for this they turned to renowned designer and longtime friend Martyn Lawrence Bullard. Since the Trousdale property had recently received a thorough overhaul, an initial walk-through convinced Bullard that no major structural changes were needed. He notes that the floor plan, distinguished by open living and dining areas that flow naturally into a large eat-in kitchen, “gives the couple wonderful opportunities to entertain in the way they want to, yet also have really intimate family experiences.” So once a short list of basic improvements were made (lighting and hardware upgraded, a state-of-the-art sound system installed, windows replaced with UV-resistant glass), the work of layering the interiors could begin.

As with all of the couple’s residences—they also own homes in Atlanta; London; Windsor, England; Nice, France; and Venice, Italy—“everything is centered around the art,” John says. For starters, Furnish and John identified key pieces to move to Beverly Hills, from paintings by Keith Haring, Damien Hirst, and Philip Taaffe to a group of Richard Caldicott’s vividly hued photographs of Tupperware. “Certainly there was a family slant in the art we chose,” Furnish says. “We focused on things that are colorful and positive and celebrations of life.”

Decisions about the art provided Bullard with a road map for materials, color palette, even furniture placement. No piece better exemplifies this than the kaleidoscopic digital print by Jeremy Blake the couple hung above the living room mantel. In its central position, the work served as a kind of template for colors used throughout the home’s public areas, evident in everything from the living room’s glossy sherbet-pink cocktail table to the shamrock-green family room sofa to the royal-blue Paul Evans dining chairs. “I love that photograph very much,” remarks John. “Though I didn’t expect it to inspire the decor of the house.” 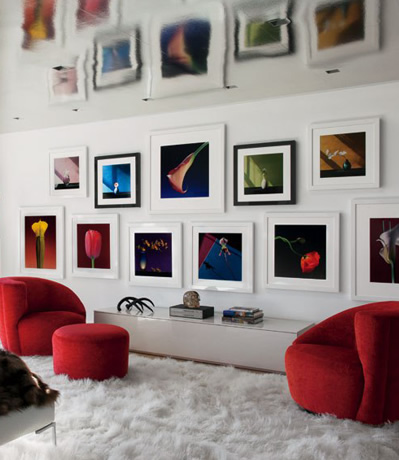 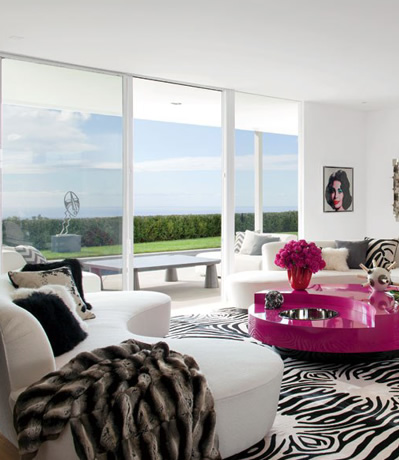 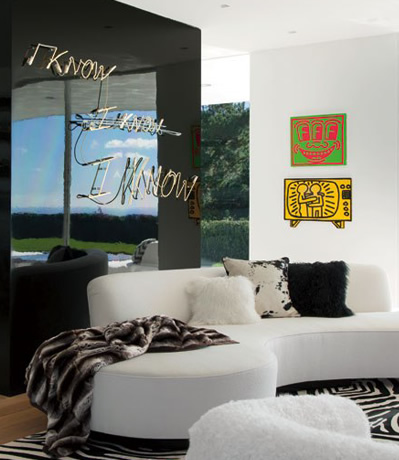