There’s a classic moment in the movie Mommie Dearest when Faye Dunaway’s Joan Crawford arrives to inspect the construction of her lavish Fifth Avenue apartment. In the face of runaway extravagance, she addresses her designer’s concern over a blocked view with an imperious directive: “Tear down that bitch of a bearing wall and put a window where it ought to be!”

Michael Hirtenstein appreciates such perfectionist impulses. After combining multiple units in a lower Manhattan apartment building designed by architect Enrique Norten, the high-octane entrepreneur and nightlife impresario was distressed to find a lone structural column—one that supported several floors of the 13-story glass tower—interrupting the flow of his double-height living room. Despite the potential nightmare of redistributing the column’s load, his response was categorical: Take it down.

“The design team looked at me like I had three heads,” Hirtenstein recalls, laughing. “But they said, ‘Let’s get the structural engineer up here and figure it out.’ In the end removing that column made the space and made the apartment.”

Architectural designer Thomas Juul-Hansen and decorator Amy Lau understand how difficult it can be to say no to their enterprising, risk-defying client. “Michael pushed us to do things we’d never done before,” says Juul-Hansen, an alumnus of Richard Meier’s office known for his deft handling of pristine planes and volumes. “He has a distinct vision of what he wants and a fearlessness and exactitude when it comes to realizing that vision.”

A serial collector of trophy properties in Manhattan, Hirtenstein has previously owned a high-profile penthouse in the Time Warner Center and spectacular townhouses in Greenwich Village and on Gramercy Park. Seven years ago he was driving downtown when he came upon a billboard promoting the new Norten building, One York; the ad featured an image of a pool on a terrace high above the street. “I’m a Pisces, so I love the water. I knew I had to have it,” he says.

And have it he did. Consolidating five separate apartments into a showstopping three-floor spread that totals 8,600 square feet, with an additional 5,500 square feet of outdoor space, he devised the ultimate bachelor pad—which promptly became a newlyweds’ nest when Hirtenstein married his longtime girlfriend, Christina Hale, in 2012.

The job of transforming all that raw real estate into a cohesive, welcoming home fell to Juul-Hansen, who developed a fluid floor plan that comprises a series of intimate rooms radiating off the lofty living area, with no awkward transitions or residual traces of the developer’s original scheme. But consolidation was just the beginning. “The challenge,” the designer says, “was to maintain the quiet luxury of light, air, and space while creating bravura architectural moments with incredibly sumptuous materials.”

Those blockbuster moments include a stunning outdoor living room of solid mahogany (steamed and bent in the manner of yacht construction) with seating and storage, a fire pit, a built-in grill, and views of two Manhattan icons—the Empire State Building to the north and the new One World Trade Center to the south. There’s also a pop-up television for Hirtenstein’s frequent alfresco viewings of movies and sporting events. (And just in case his guests are enjoying a swim when the game goes into overtime, there’s a projection screen that rises magically from the shrubbery planted alongside the slate-edged, mosaic-lined pool.)

Juul-Hansen’s architectural tours de force continue inside the apartment, where massive planes of silvery travertine, richly veined marble, blackened steel, Italian leather, tamo ash, and artisanal plaster define individual rooms. Even the apartment’s staircase is treated like a theatrical showpiece, its steel steps wrapped in pale oak, with integrated LED lighting on each riser and a sinuous railing of hand-carved rosewood. “This place has a level of articulation and detail unlike any project I’d ever worked on,” Juul-Hansen says.

Not to be outdone, Lau decorated with bespoke furnishings equal to the architecture in quality, craftsmanship, and ambition. Her assured hand is perhaps most evident in the 19-foot-high living room, where she tempered the soaring scale with two enormous silk rugs (one round, the other oval) that delineate separate seating areas, each furnished with a custom-made Vladimir Kagan sofa, while a single majestic Lindsey Adelman glass-orb chandelier floats overhead. In the adjoining dining area, which sits beneath a monumental abstract plaster relief by artist Malcolm Hill, two enormous golden-bronze blocks by Silas Seandel support a nearly 13-foot-long tabletop of laminated glass. All the furnishings were developed and refined on-site with models and templates to ensure harmony of scale and proportion.

For one corner of the living room Hirtenstein commissioned a sculptural minimalist black-and-silver-resin piano from the London art-and-design group Based Upon. Its striking organic form is echoed in the cocktail table the studio crafted for the master suite, which features a cashmere-and-silk carpet so impossibly plush that a bed seems hardly necessary.

“Michael is obsessed with tactile quality and dimensionality. You can see it in the exquisite fabrics and window treatments, which are like couture creations,” says Lau, who has worked with Hirtenstein on three previous residences. “He definitely likes bling, but the bling here has restraint—it’s a subtle knockout.”
Indeed, the true brilliance of Hirtenstein’s home rests in its dizzying array of luxe surfaces, textiles, and fixtures, each one a quiet triumph of rich materiality and ingenious construction. “I want everything I touch to be extraordinary in some way,” he says. “Even the shelves in my closets are totally lined in leather.” And needless to say, there’s not a wire hanger in sight. 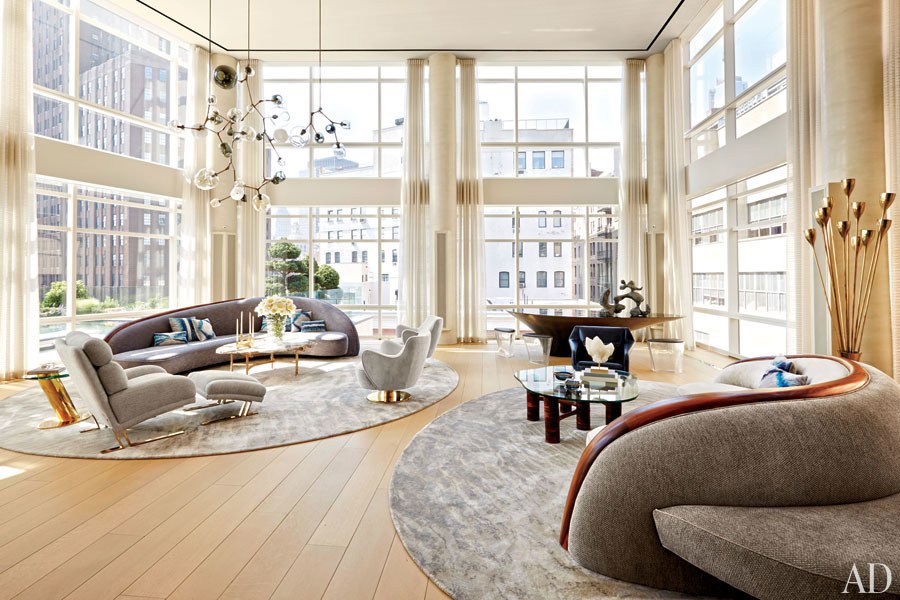 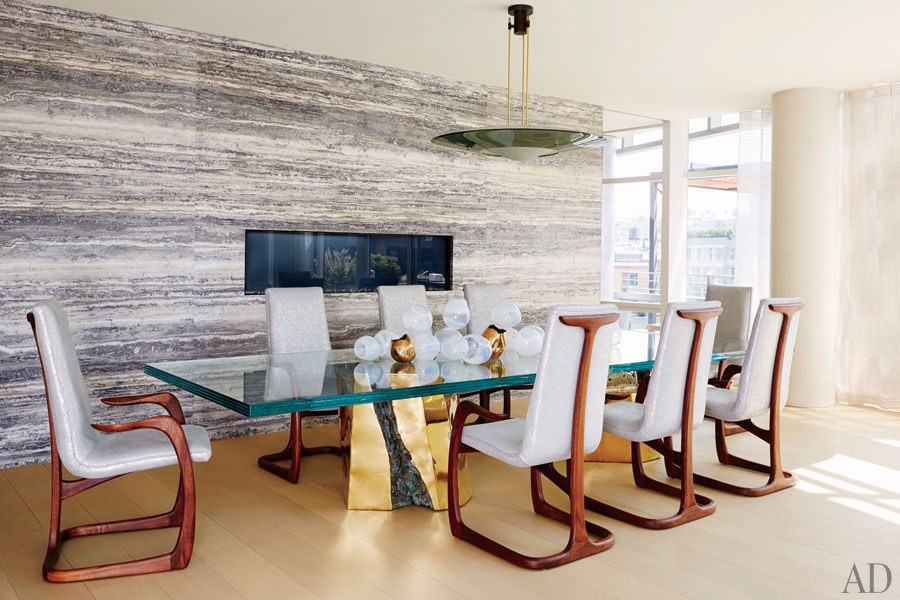 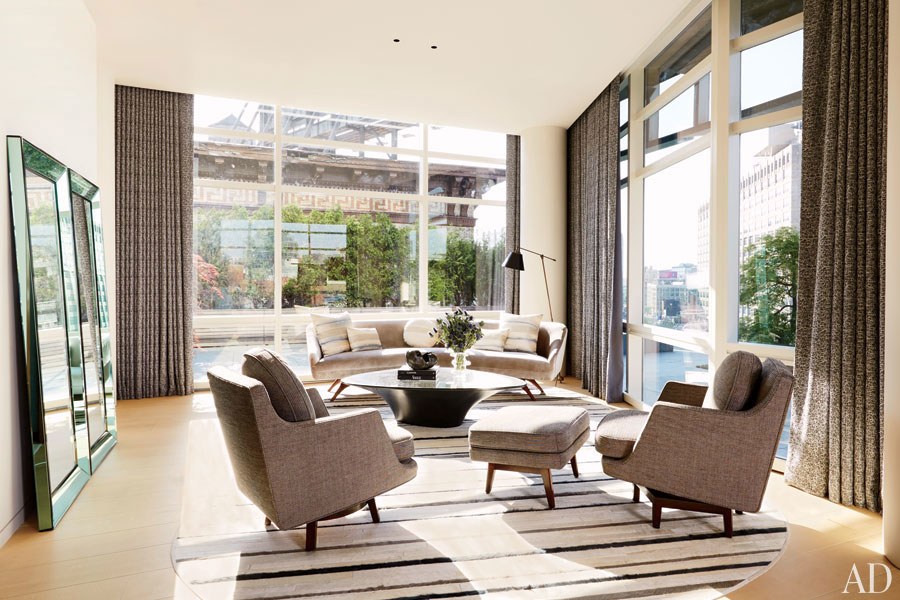